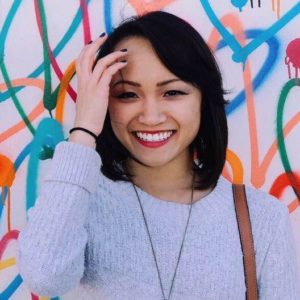 Reflecting on why I chose to take The Alpha Course, I realized that although religion has never been a part of my life growing up, I had always been curious. And through Alpha, my curiosity has transformed into a new beginning. For me, this class has offered insight into what a life of faith is like and what being a Christian really means.

I spent nearly half of my life living in mainland China, where religious practices remain tightly restricted even today. There was no talk of faith. And I learned early on to never mention God. God was nonexistent and faith was against reason. Religion was against scientific advancement and church was forbidden ground.

Before my grandpa passed away, he took me to an abandoned church and told me that my great-grandparents were Christians. “In crisis,” he said, “That’s when people come to know God.” I didn’t understand him then. That was the first time I had ever seen a church and heard the word “Christian.” I had so many questions; questions that would remain unanswered for a long time.

Fast-forward to college:  a time when my curiosity in religion resurfaced. During my sophomore year, I was given the opportunity to play in the band for Christian Musical Enrichment Theater (C-MENT). I did not know it then, but it was a defining moment. It was the reason I became a part of Peñasquitos Lutheran Church (PLC). And the invitations kept coming; many thanks to Adele, Pastor Greg, and my best friend, Rachael. Each experience left me feeling inspired and moved, but deep down, I still silently doubted. As I listened to amazing stories of a redeeming grace whose love is beyond measure, I could not accept that there could be such a “too good to be true” God.

In the midst of my doubts, I suffered some life-shattering events. Disillusioned and saddened, I became a bitter skeptic. For the first time, everything I thought I wanted in life became meaningless. And the thing that plagued my mind was the question, “What happens when reason fails?” Nothing had prepared me for this moment—the moment when I could not rationalize the traumas that left my soul restless and my heart hardened. I stumbled in darkness and blindly searched for “happiness.” Yet I still felt an empty hole in my core that nothing tangible could fill. I found myself longing for answers. And time and time again, I found myself coming back to PLC despite all my doubts.

Now, more than three years later, on the night before the Spring 2016 Alpha Course would begin, I suddenly had a strong feeling that I needed this class. I asked my best friend Rachael if she would take the class with me, and she motivated me even more with her “yes” to my spontaneous decision. Little did I know, I was about to embark on a life-changing, perspective-shifting journey.

Alpha was nothing like I expected. For me, one who was unfamiliar with the Christian faith, I found the weekly lessons to be very informative. Moreover, the small group discussions allowed me to see, from a more personal angle, how faith has influenced and transformed individual lives. Those in my small group have truly touched and inspired me with amazing stories of their own journeys in faith.

Through Alpha, I learned that faith is not “blind faith,” as I had misunderstood before; nor is it a constantly fluctuating emotion or feeling. It is the constant, unchanging trust in God.

Contrary to the common idea that faith stands against reason; faith, as I know now, works perfectly well with reason. I came to understand faith and reason in analogy with the human brain. Just because the right hemisphere of my brain is functioning perfectly, does not mean I can get rid of my left brain. In the same way, I cannot live without faith. And because I lived without faith, my soul suffered.

The real turning point came when Pastor Sean said that faith is about having a relationship with God. All this time, I had missed the most crucial point of faith—that faith is to be experienced as much as understood. And the moment I opened my heart to experience this new relationship through prayer, everything I have read and every song I have sung of God made sense. And I realized, faith is like seeing the Grand Canyon for the first time—I could read a hundred stories and see a thousand pictures to try to imagine and understand what it could be like, but no amount of explanation could ever match the actual experience of being there. And once experienced, no explanation was needed. Healing filled up the empty hole in my soul. And I finally understood what my grandpa told me many years ago. When I was lost in my struggles, God was always there. All I had to do was let Him in. What I thought was too good to be true, well, it is too good. He is too good to this flawed, skeptical, ordinary soul of me.

I realize now that a life lived in faith is not one that is devoid of reason. Instead, it is a life that experiences a deep relationship with God through both reason and faith. It is a life that humbly acknowledges the limit of human abilities and seeks guidance from God’s limitless capacities.

I now know that in this loud world that can often be filled with anger and hate, I can trust in God who calmly and patiently guides me out of chaos. I can have peace after grief and joy after loss. I can love the unloved and forgive the unforgivable. I can live a life that speaks eloquently about hope without needing words; a life that heals and never loses light.

What happens when reason fails? Have faith. The answer to my question turned out to be so simple, and the journey that brought me here was life-changing.

View all posts by adelegb1 →